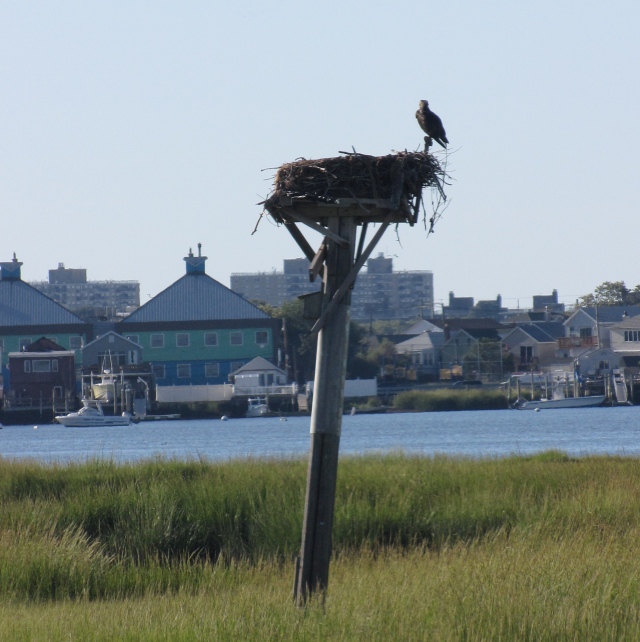 I spent the weekend of the 14th at the 5th annual Jamaica Bay Shorebird Festival. It was a great time with some great people, great birds and great weather. I was able to see 15 species of shorebird during the weekend with some other non-shorb highlights as well. The highlights included great looks at White-rumped Sandpiper, Long-billed Dowitcher and the continuing American White Pelican.

James Orrico and I arrived early to meet Dave Hursh who had driven down from MA the night before. Dave was able to join us for half the day Saturday. We started early, in the gardens behind the Refuge Office, looking for an migrants. Not much but we did find a possible resident Common Yellowthroat responding to pishing as well as good looks at Osprey.

Soon we joined the rest of the participants inside for refreshments before enjoying slideshows by Don Riepe and Lloyd Spitalnik. Then it was time for birding! We geared up and headed for East Pond.

Our plan was to bird the South End, then move up to the Raunt before returning to have lunch and see Dave off. We began encountering shorbs immediately and soon started scoping the flocks. The highlight of the morning, for me was the time we spent studying various White-rumped Sandpipers. It was good experience and being able to pick out their insect-like flight call by the end of the day was very rewarding. 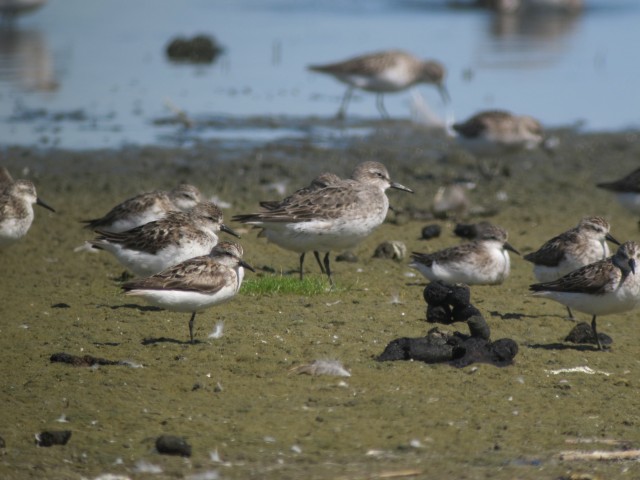 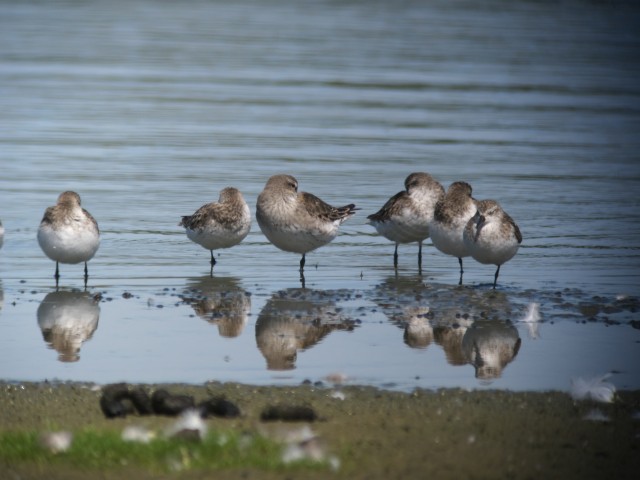 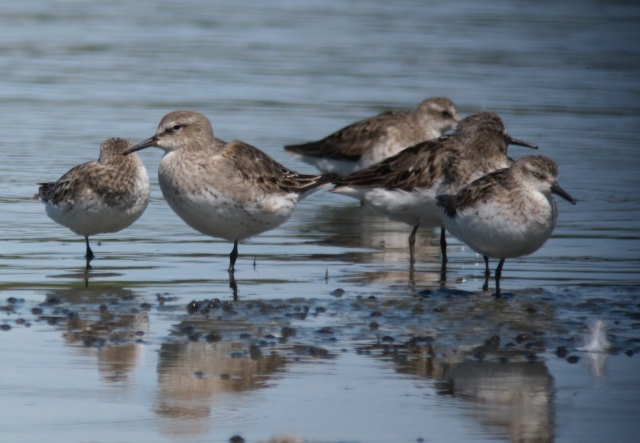 Before we knew it we had reached the Raunt where we enjoyed great looks at Stilt Sandpiper and Greater Yellowlegs and good comparisons of juvenile Common and Forster’s Terns. The American White Pelican also showed nicely. We also had 2 possible Long-billed Dowitchers, though the birds in question were never confirmed, although some said it was a Long-billed, some said it wasn’t. 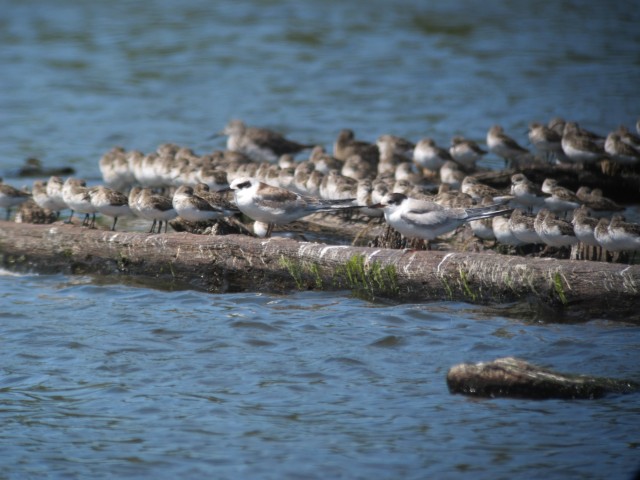 Soon it was time for lunch. Afterwords we said our goodbies to Dave and joined the rest of the group at the North End. I continued my work with White-rumped Sandpipers, picking out two more in a large flock of shorbs. I moved on a bit farther to a spot where a Red Knot was being seen associating with Black-bellied Plovers and Short-billed Dowitchers. I was also able to add Willet and American Coot to the day list. The 3 hours felt like it had zoomed by and we soon found ourselves back at the main building. 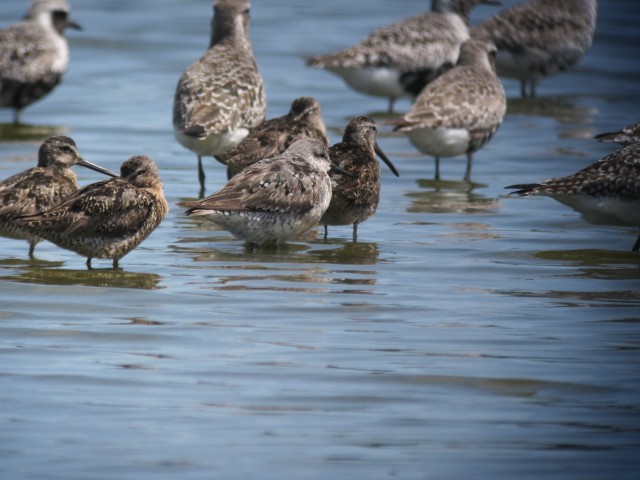 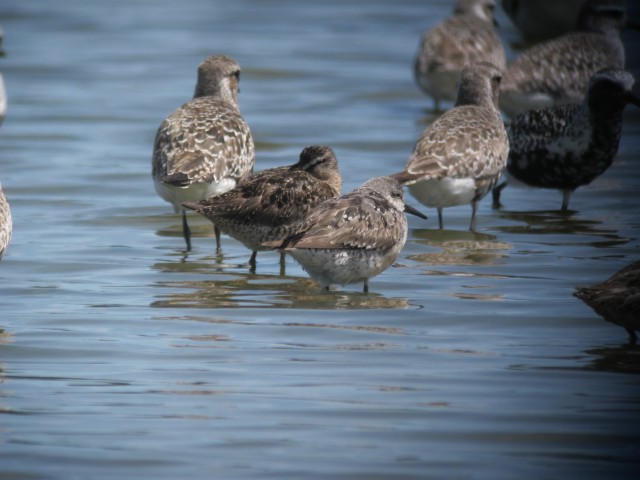 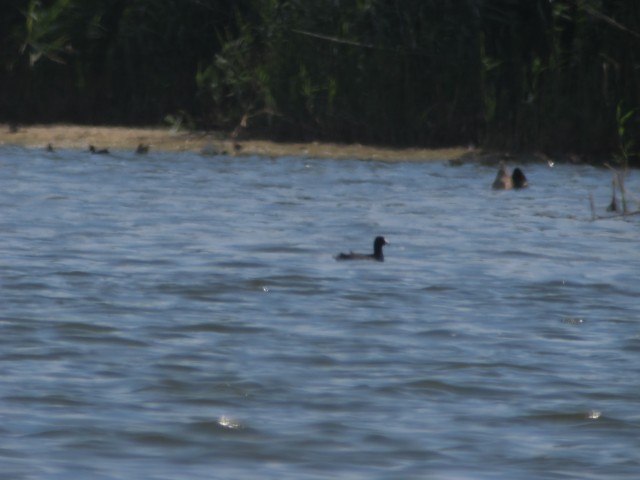 This time it was Kevin Karlson (Author of The Shorebird Guide) presenting his new idea “Birding By Impression.” I thoroughly enjoyed and learned a lot from Kevin during his presentation. It was a great way to end a fantastic day of birding!!

Today we got a later start as Kevin Karlson’s and Lloyd Spitalnik’s ID Workshop didn’t start until 8:30. After Kevin’s excellent presentation yesterday, I was excited for the workshop and what I could learn from it. Using his idea of Birding By Impression (judging birds by unchangeable features such as size and shape) Kevin taught us a number of techniques for bird ID. 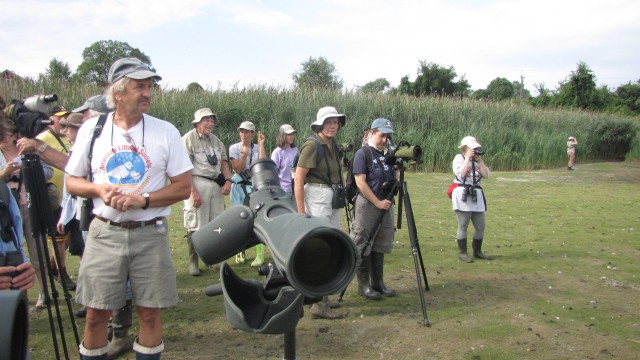 Again, we started seeing birds as soon as we stepped off the trail. We located a young Little Blue Heron a Glossy Ibis flew by and a Ruby-throated Hummingbird buzzed past.

Our first test came a little south of the Raunt when Lloyd located an alternate plumaged Long-billed type feeding with Short-billeds. This was a great opportunity to learn about identifying Long-billed. I dove right into it. The bird was feeding constantly and it was hard to get a good view of the overall structure and bill length. The dowitcher was very slim and didn’t show the “swallowed a grapefruit” look, typical of a Long-billed. However, birds that are undernourished don’t show this feature. Twice the dowitchers flew off and came right back to the same area but the bird never gave a flight call.

The dark back contrasted nicely with the orange head, breast and underparts but we weren’t fully convinced and felt good about calling it a hendersoni. That is until the bird picked it head up and immediately we noticed the stockier chest and thinner, longer bill which didn’t show the common Short-billed “got stuck in a door” feature. So we had the Long-billed and what a lesson we got from it! 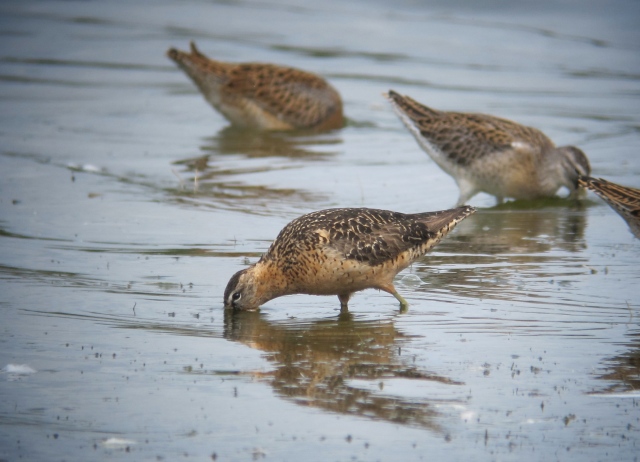 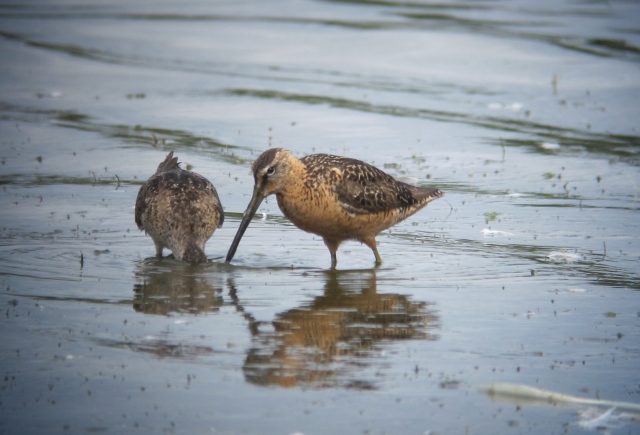 Another shot of the Long-bill 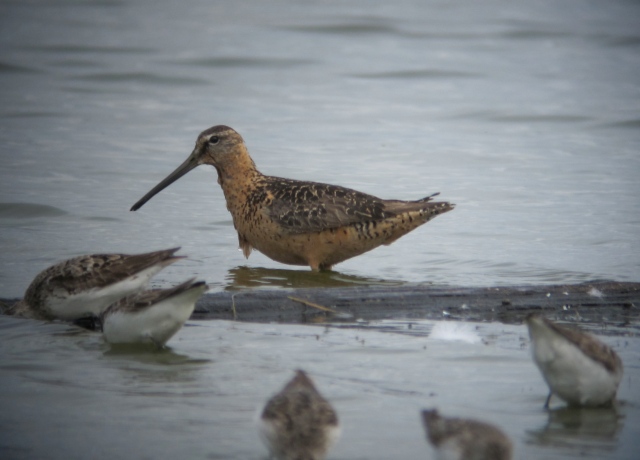 The look that confirmed it, note bill shape and chest

We continued onto the Raunt where, for the second day in a row the American White Pelican was showing nicely. We also picked up on a roosting White-rumped but the trend from yesterday continued, as were unable to find a roosting Western Sandpiper. 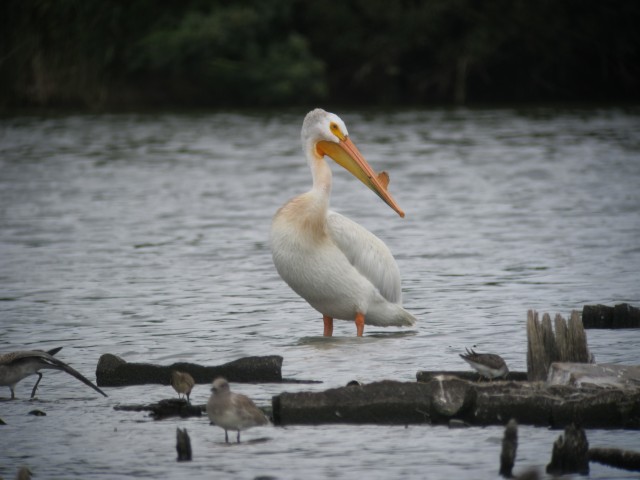 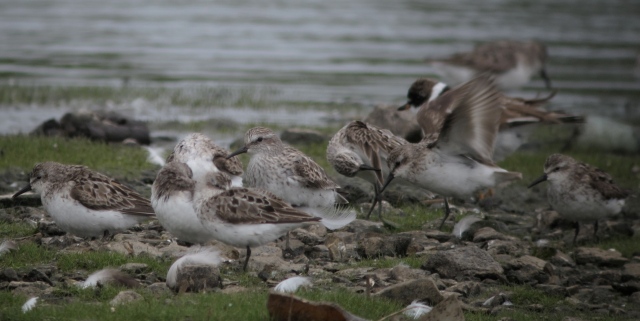 Moving on, we caught onto a calling Clapper Rail and then flushed a Spotted Sandpiper from the edges. Scoping the ducks we noted Green-winged Teal, Northern Shoveler and Ruddy Duck among the usuals. 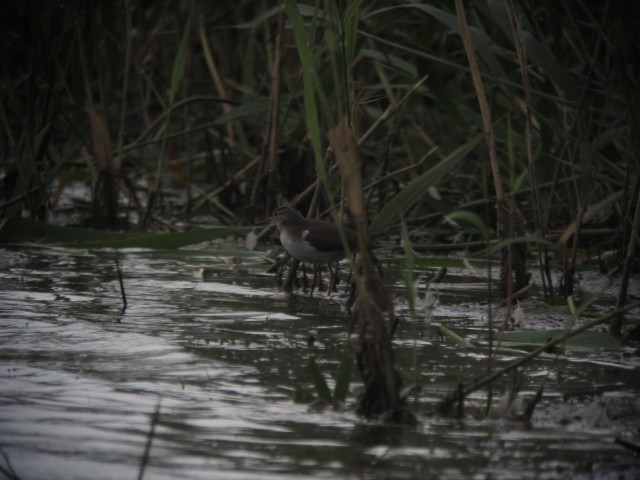 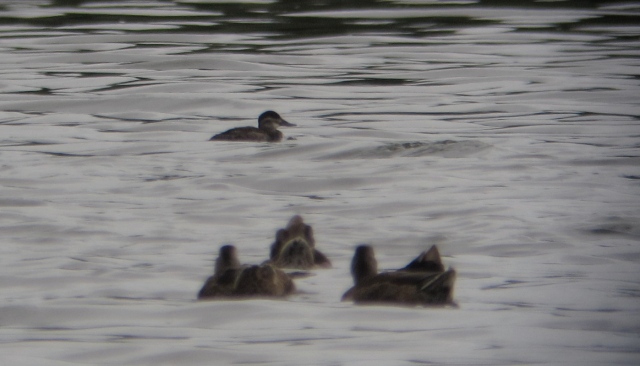 On the last leg, we located a very large flock of feeding shorebirds. Stilt Sandpipers were in abundance and we picked up another Spotted along with a Ruddy Turnstone. But once again, we had to leave a large and promising flock empty handed, without a Western. 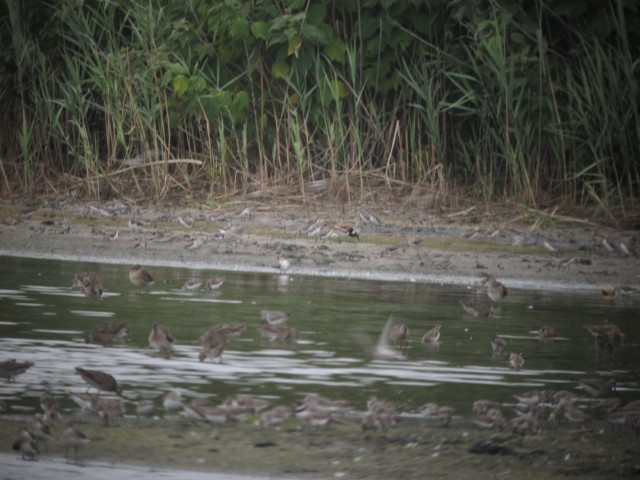 It was a terrific weekend, though the only downer was the miss of Western Sandpiper. Perhaps it was the presence of 4 Peregrine Falcons during the weekend, though I’m sure that’s not the reason. Kevin and Lloyd did an awesome job at the workshop and I really learned a lot from two very experienced and knowlegeable birders. Overall, not bad. Here are the shorebird totals:

Spotted Sandpiper (3) Past the Raunt

Ruddy Turnstone (1) Past the Raunt

Short-billed Dowitcher (700+) Including a bunch of hendersoni

This entry was posted in New York Birding. Bookmark the permalink.