After the 4 day storm we just experienced, the calm weather has allowed migrants to start moving. I decided to take advantage of this and head to one of my favorite local patches, The Birdcraft Sanctuary. And as always, I had a great time!

This is a fantastic migrant trap, but unfortunately, a bit under birded. I try to cover it as much as I can but because of treatment often miss whole weeks at a time before spending an entire week there, making my coverage inconsistent.

Today, I was able to notch 9 species of warbler, with some great surprises. My best area was the trees surrounding the pond as viewed from the bridge and along the path. Here’s a list of species seen:

Philadelphia/Warbling Vireo (1) Really quick look at bill and tail. I knew immediately it wasn’t a Red-eyed but wasn’t able to see the rest of the bird to confirm the species

Catharus sp. (1)  (I know I’m better than this!!) A very interesting bird. This bird was in the shade and sat in one spot for a good minute where I was able to study it. I saw no rust whatsoever, it didn’t have the eye-line or buffy throat of the Swainson’s, it was definitely not a Veery as the spots were distinct. I’m not saying the bird is a Gray-cheeked/Bicknell’s because of the conditions. The bird was in a very shady and low lit area where it was tough to get a gauge on the exact coloration of the bird. Actually, the photo makes it look a lot like a  Swainson’s although I confirmed that it was not. If you have any thoughts please post a comment. (Photos below) 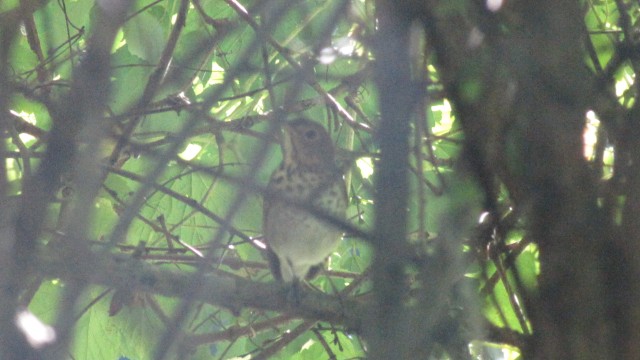 This entry was posted in Connecticut Birding, Fairfield Birding. Bookmark the permalink.