Thanks to our decision to forfeit our Great Gray Owl stake out in favor of sleep, we awoke a little more well-rested the next morning and ready to begin the day’s journey out of Yosemite and down the eastern edge of the Sierra Nevada Range (which Yosemite is a part of).

Our ride took us through Tioga Pass, including the Gaylor Lake area where we’d shared an incredible adventure the day before. By the time we emerged from the long, winding roads of the pass, we found ourselves in a radically new landscape, one I had never seen nor experienced before.

We were in the Great Basin, an area characterized by Piñyon-juniper Woodland, Bristlecone Pine Groves, and vast areas of sagebrush. Many of my targets here were birds only found in the Great Basin Area and surrounding regions, birds I’d never even had a chance of coming in contact with previously.

Our first stop was the ghost town of Bodie, north of the town off Lee Vining. Bodie is one of America’s most well-preserved ghost towns, and provides a snapshot of what life was like in these remote regions more than a century ago.

Bodie is also one of the best spots in California to see a number of Great Basin specialties. Our main target here was Greater Sage-Grouse, but we were definitely keeping our eyes out for any other sage specialties as well.

Our first taste of Great Basin birding came on the entrance road to the town. Here we were able to put together a nice list of birds, highlighted by a Piñyon Jay as well as Clark’s Nutracker, Steller’s Jay, and Common Raven (a 4 corvid stop!). We also noted our first Mountain Bluebirds of the trip.

By the time we reached the town around 9, daylight (and heat) was increasing fast. Now we were on a race to nail down a few of our targets before it got blisteringly hot.

Our plan was to bird the vicinity of the town before moving into the surrounding hills if necessary as well as enjoying the history-filled town as we went along. 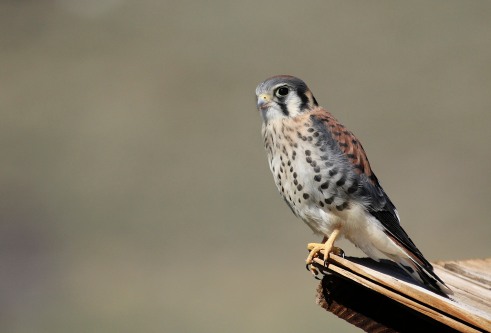 We also were able to connect with three major targets for this location including a Sage Thrasher, a number of Brewer’s Sparrows, and a couple of Sage Sparrows.

However, Greater Sage-Grouse was still eluding us, and it was getting late. Obviously, we were going to have to miss a bird at some point. Yes, we’d missed Great Gray Owl, but had success with the majority of our other targets for the trip so we were definitely due.

Our continuous laps through the sagebrush surrounding the town were not paying off and we were already late for our next planned stop. With this in mind, I decided to try one last portion, an area that I thought looked the most ‘Sage-Grousey’.

I quickly called my dad up to my position and together we enjoyed watching the grouse gradually making their way up the slope ahead of us. 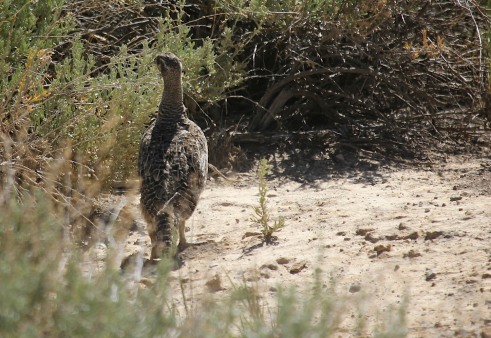 After some time with the Sage-Grouse, we were on our way, but a bizarre sight awaited us on our way out of town. When I heard my dad call “gull!”, I thought, ‘you have to be joking.’ A California Gull perched on a park sign in front of us, however, confirmed that he was doing no such thing.

It was certainly odd to see a California Gull perched on the side of a dusty road when there was no standing water in the vicinity and the nearest notable water body was Mono Lake more than eight miles away. Perhaps feeding on insects?

Surprisingly enough, Mono Lake was our next stop on our way down the Sierra Nevada, and was on my mind long before the Cal Gull turned up seemingly out of nowhere.

Arriving at Mono Lake County Park nearly a half hour later, we immediately proceeded to the lake overlook. Here, impressive numbers of birds worked the lake, feeding on the immense bounty of brine shrimp. Unfortunately, time was short and we were unable to work through the masses like I would’ve liked.

Nevertheless, I did give the entire lake a quick scan, which didn’t take long to yield our primary target here: Eared Grebe. Also seen were impressive numbers of Wilson’s Phalarope and California Gull (2000 and 700, respectively) as well as a few Red-necked Phalaropes, Western Sandpipers, and Killdeer mixed in. Violet-green Swallow, Marsh Wren, and Virginia Rail were also noted in the vicinity of the lakeshore. 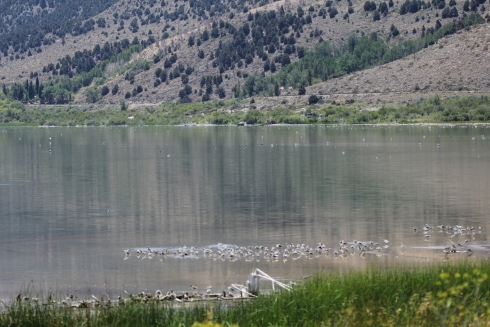 A small piece of the Mono Lake masses. California Gull, Wilson’s Phalarope, Eared Grebe, and Western Sandpiper are all present in this image.

Frustratingly, our other major target here, Black-billed Magpie, was heard well as we were making our way back from the overlook, but unfortunately never seen here on the edge of its range.

Other highlights from other portions of the park included California Quail, Yellow Warbler, Orange-crowned Warbler, and Bewick’s Wren.

With little time to spare, we hit the south end of Mono Lake in search of Gray Flycatcher and Lewis’s Woodpecker.

While searching for the Lewis’s, we enjoyed a nice flock of 27 Piñyon Jays. Although none of these birds were very close, nor low to the ground (thus no photos), they nevertheless provided a nice experience with this very vocal and gaudy species, one that I had only first seen that morning.

It took a while, but eventually we were able to luck into a flycatching Lewis’s Woodpecker, at the top of one of the Jeffrey Pines. A few minutes later, a second Lewis’s appeared, and together these birds took off and flew to the lake.

After the Lewis’s, we made a stab at Gray Flycatcher in prime habitat. Not surprisingly, we missed it. This was likely due to the intense afternoon heat as well as the fact that we were very short on time. I’m sure some hard searching (even at that warm time of day) would’ve yielded at least one Gray.

We still had plans to hit the White Mountains, both as a backup for Gray Flycatcher and as a possible location for picking up Juniper Titmouse, another Great Basin Specialty. However, we still had a long drive ahead of us to reach Kern County, and had to forgo this stop in favor of making our way south, abandoning our prospects at the flycatcher and titmouse for the trip.

Despite the miss of Gray Flycatcher and Juniper Titmouse, our journey down the eastern end of the Sierra Nevada was incredibly successful birdwise, and we also witnessed some stunning and very cool landscapes along the way. With a day like this in the books, we were certainly looking forward to the rest of the trip, not least of all what lay in store for the next day.

This entry was posted in California - July/August 2012. Bookmark the permalink.